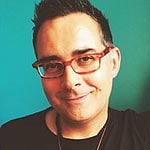 Luke Meddings is an award-winning author, trainer and international speaker. In 2000 he co-founded the Dogme ELT movement with Scott Thornbury, and their book Teaching Unplugged (Delta, 2009) won a British Council ELTon award in 2010. Since then Luke has trained extensively, and in 2011 set up independent e-publishing collective The Round with Lindsay Clandfield. Their own book, 52: a year of subversive activity for the ELT classroom, was published in 2012.

Not everything that happens in class has to feed the unit or fit the level. As teachers, we need to allow our learners to encounter spontane [...]

In my first blog, The Night Sky, we considered language in terms of recognition. The examples we used were constellations, and the learning [...]

'We had the sky, up there, all speckled with stars, and we used to lay on our backs and look up at them, and discuss about whether they was [...]

happy advance
22:55 01 Dec 21
Go and get it...i thank gallery teacher to have tefl at the end , after too much torture not to have, although i have... it, i have to face to another problem...like you get the glass to drink, glass drops ...yet gallery teacher can let us to do more ...thank you gallery teacher, a good friend...read more