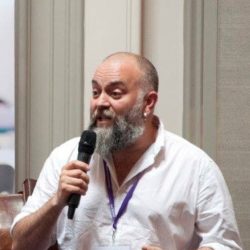 How many of you were taught to swim by a fish? Not so many? None? Yes. None. Because, although they are often good at swimming, being good at swimming in no way qualifies anyone to teach it.
When I say this at conferences, people laugh. They are meant to, it’s a joke. But the point I’m making is serious.

My whole career, and my professional CV is based on four things: I am male, I’m white, I’m British and I can grow a really good full beard.
Sad, but true.
I have been lucky enough to work all over the world. I got employed and paid to travel across the globe, to arrive and be then paid far more than my, often much higher qualified and experienced, ‘non-native’ colleagues. Despite me holding the academic equivalent of a Scout Badge. My teaching cert was a four week course, that I achieved a PASS in, by the skin of my teeth.
My first degree was entirely unrelated to both English language and teaching (or, as it happens, pretty much any other life skill, actually….).

When I was 26 I got a job as a school principal in Asia. The school was owned and run by an ethnic Chinese man. In a country where that was not a great marketing message, due to local prejudices, at that time.
So he ran the actual school. I just sat in a big office with a big window into the Main Street and sat there looking…… white… and spoke to parents.
My main responsibility was not to be Chinese. Even at weekends. This was lucky as I was probably rubbish at all the other requirements of the job. However, I managed not to be Chinese.
Not a great reason to hire someone.

On a side note; when I spoke to local people I was sad, but, ultimately not surprised to hear EXACTLY the same anti-Chinese tropes and diatribes as I had previously heard in Europe, about Jews.
Almost verbatim. The same accusations, baseless racist slurs, expressed almost as folk myths, with the same pernicious convictions and venom. In an odd way, reassuring to see stupidity is blind and can convince stupid people to hate anyone, anywhere.

As an industry ours is very much at the forefront of expanding horizons and any language teaching does that as an integral part of the job.
Because that’s what language is, a window into another world, a key to a different perspective.
As Wittgenstein said ‘the limits of my language are the limits of my world’ (although, as a man who was arrested in 1926 for severely beating a student he’s not the best example to teachers… I digress).
At least… this is what our industry should be, you’d think, almost by definition.

Why then adverts for ‘Native Speaker only’ teachers?

Complaints from students about staying with a ‘foreign family’, meaning someone in it is not white, blond and blue eyed.
Why then brochures for schools filled with beautiful, skinny, young white people?

With English there was, formerly, a lot of cultural baggage that accompanied the language.
When I started it was all red buses and the queen, or burgers and the Statue of Liberty.
Now, of course, that has all changed with the realisation that the English language is no longer the possession of any culture.
With possibly as few as 400 million ‘native speakers’ in the world (a description itself which is swiftly, thankfully, becoming an anachronism) far outweighed by the over 2 billion people who speak English in the World we have started to grasp the obvious reality that what we speak and teach is now a Lingua Franca and not a cultural accompaniment to any specific nation.
New York is, currently, the modern Rome, and just like under the Roman Empire, that means the world has had to learn English, the Latin of our days. Yet, there is no longer any need to learn American, Australian, South African or British English. There are equally authoritative speakers in Delhi, Guangzhou, Dubai, Athens or Lima.

And the same is true for teachers. Or should be. Make it so!

Where one is from is no longer taken as the indicator of teaching ability. Our students are extremely unlikely to be speaking to clients from London or Boston but will need to be able to communicate with people from Harbin, Vladivostok or Sao Paolo.

No language or culture remains static, and never has (the English language itself is a cocktail of Scandinavian, Germanic, French and Latin, the Esperanto of the 12th century, if you will).
So it’s logical we are now teaching a Lingua Franca. Because it’s what the world needs.
Not that the World knows this or is ready to admit this.

Because they’re still there, the ‘Native Teacher Only’ adverts, the CVs of a ‘foreign’ name or a non-white face slung aside.

I’ve argued with the clients refusing to be taught by someone whose ‘accent’ they claim not to understand, when what they don’t understand is having someone who is not white teach them a language they think can only be taught by a white person.
Pointing out the person doesn’t have an ‘African’ accent… because they’re Scottish, Scouse, Cockney, Parisian or from Sydney, Brazil or Milwaukee.
It stains the soul to have that conversation again and again.

Yet, has our industry caught up with this? Has the market? How many adverts still ask for a native speaker? How many schools still advertise their native speaker teachers?

I used to be paraded in front of parents or governors like a performing monkey, a testament to the quality of the school’s credentials purely due to geographical birthplace and skin pigment.
Hand on heart, can we say that has totally vanished? After teaching, I got managerial jobs and sales jobs because I was a bloke; as if a sales trip to Spain was comparable to scaling the North face of the Eiger and required some mythical male qualities. Thankfully, that has changed too, and yet we, as an industry, still need organisations like: TEFL Equity Advocates and Lead 50 50.

When I speak at conferences and see an overwhelming majority of female teachers in the audience, yet the managers and organisers and school owners that set up those events are overwhelmingly male, I ask myself how far we have yet to go.

I am lucky enough to visit schools across the world every year and find incredible people from every kind of background who always teach me things about ‘my’ language that I never knew.
And about teaching.
Yet how often do they look at me furtively to see if they’ve made a mistake or got it ‘wrong’ as if, by virtue merely of birth location, I am somehow a qualified arbiter of how best to teach in a country and culture that I arrived in as recently as that morning.

The idea that if one is not born in a culture, one can never learn the language is entirely ridiculous and based on a total lack of faith in education, as if nobody can ever learn anything.

Nobody ever asks if a maths teacher was born in Algebra. Einstein was a very successful scientist despite not being born in a laboratory and Steve Jobs was fluent in tech even though he was not raised in a computer.
People can learn things. Really, really well. Human history proves this again and again. Despite our fundamental inability to grasp the one, key lesson of human history: how not to ceaselessly fall on each other and slaughter each other in the most barbaric ways possible. But, learning we seemingly can do… not killing each other, tragically, less easy… apparently.
I digress…

That’s it. People will often try to undermine a language teacher by displaying or testing bits of the language we might not know. As if anyone, from anywhere, could ever know every nuance or cultural reference of any language.
I certainly don’t. Mind you, as any of my students will testify… I’m not a great teacher!

Qualification and experience count much more than the accident of birth geography.

So the next time someone tries to disprove your professional qualities by calling you a ‘non-native’ (or even lauding you as a guru simply because you are a ‘native’) it’s worth pointing out that you have successfully learnt the language you are teaching, and qualified in both the language AND teaching it.
We have all met lauded ‘native speaker’ teachers who have completely failed to ever learn any other language.
I was one! I’ve learnt languages because… how else can one successfully teach languages? Nobody would ever let someone who can drive dismantle the engine of your car, reassemble it and then race it.

Being able to drive does not mean you are a mechanic. Speaking a language is no guarantee you can teach it.

Obviously, these are not new ideas, I’m not saying them for the first time myself, and plenty of other people have said them far better long since: Silvana Richardson, Marek Kiczkowiak, Hugh Dellar and countless others. But how many are listening?

Looking around the World today, seeing the old order crumble, as Brexit looms and we all ask will Britain become the new Faroe Islands and gently fade from the pages of history?
If America is the modern Rome, why did they elect Caligula?
As populism and the kind of polarisation our grandparents fought to break free of rises again… what can we do as language teachers?
Should we do anything, as teachers… whose agenda are we ‘right’ to promote?
Should we force our political ideas on our pupils?
Or restrict ourselves to grammar and vocab…?
How far does education go before it becomes indoctrination?
Just because I think the rise of fascism needs to be fought tooth and nail… why does that make it okay for me to try to get my students to agree with me?
Are we not at risk of reproducing the very imperialistic blueprint I raised against at the beginning of this article, my propaganda masquerading as cultural linguistic essentials?
I haven’t got answers, just questions… sorry.

Seeing new nations and languages rise…. what will our grandchildren speak?
And who will teach them? And will accidents of linguistic geography matter in a globalised world of instant communication?

So my message (fear not gentle reader, I’ll finish soon) if I have one is; we are the agents of change and so, much like our professional lives in the classroom, if people are asking us for things they don’t need; educate them. Next time a parent/client asks where that teacher is from, pick one of the answers below:

‘DELIGHT! Yes, at great expense we have flown them here from a far off land, they know little or nothing about our culture, language or students or their needs BUT, rejoice! For this teacher HAS grown up and qualified in something entirely unrelated, can stumble their way, more or less coherently through a sentence in English AND joy of joys, has watched every episode of Eastenders since 1994 and likes bland food and is thus, a worthy educational vessel in whom to invest your future. Now hand over your cash, you gullible muppet’.

Were you taught to swim by a fish?

Choosing the right TEFL course provider can be a tough one.
Take a look at Gallery Teachers TEFL Courses and find the most suitable course for yourself. Never stop learning!
Do you already have your TEFL qualification? Check our available jobs here!