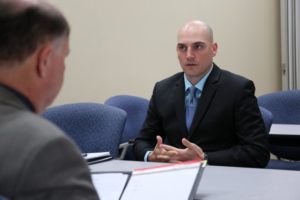 Our state of mind plays an important role in our performances. As a foreigner in the UK, I know for a fact that when I have to talk in public or in a formal meeting, my English level decreases drastically: my tongue tightens, my grammar leaves me like birds in winter and my vocabulary rapidly slips into basic mode.

Am I the only one whose performances are deeply affected by his nervousness? And if we English Experts are so fragile, what happens to our students when they are nervous themselves?

During my Christmas holidays in Spain, I was contacted by one of my students – an adult Pilates instructor, very worried because she had to give a Pilates class with international students at a job interview – with her future Manager checking her English…

English is the Achilles heel of her professional life and in the past she didn’t get a few jobs because her speaking skills weren’t considered good enough. The interview was the next day and we didn’t have time to rehearse the class, so we agreed to meet for a walk in the evening and exchange a few ideas.

My original plan was to boost her morale, to tell her that she had enough experience to give a satisfying Pilates class to her students, that everything would go smoothly and the only thing she had to keep in mind was to focus on them and forget about the manager there to evaluate, or indeed judge, her.

Yet, when we met I knew straight away that this wouldn’t work and the next day her focus would be so fragile that all of a sudden she would forget about her students and would just think with a blank mind that she would show the Manager how inadequate she was for the position, thus embarrassing herself.

What’s the point in telling a student not to worry, when we all know that he has to worry, and that worrying is a natural process that we cannot magically avoid?
In this situation, I realized that the best advice is not Not to worry, but Fight worry back, because most likely, her manager had the same level of English language, if not worse.

So instead of trying to forget that her manager was there to judge her English, I suggested my student and friend to focus on him: the goal of the class/interview was to persuade the manager that her English was good enough. To do that, she had to pretend to be confident.

How do you do that? In short, by not hesitating. We were walking and I took advantage of it. I asked her to tell me a few sentences she was going to use, and every step she made had to be a word. She had to focus on her steps instead of the words to use, no matter if they made sense or not really, as far as every step was followed by another one with no hesitation.

Unlike other languages where you have to state every single word, in English you don’t have to understand everything in order to understand the meaning of the sentence. As a foreigner in the UK, I believe communicating (meaning exchanging information from two or more sources) is more important than communicating using a perfect language.

What if she missed the right word? Then she had to invent it: walking confidently was more important than speaking proper English.
This idea came to me from Writer Roald Dahl, who in the short story The Great Automatic Grammatizator wrote that from time to time Writers write fake words to show their culture.
So, if my student was missing the word Knee in the sentence Bend your knee, she could say Bend your Gnauf: as far as the manager wouldn’t notice the hesitation, he wouldn’t get the mistake.
It was fun, and we continued to practice Fake English to get the hang of it.
Interestingly, by practicing Fake English, her fluency in the real one improved impressively fast.

What about her students? She would simply say Follow me, Do what I do, and then Stretch your lawbrings like I do. After all, her students were foreigners as well and the English ones knew she is not native speaker: they would be there to do Pilates, not to listen to Oxford English, so they would just mirror her as the others.

Now, a moral question: is it OK for an English Teacher to suggest his students to invent words? Probably not, but as Machiavelli used to say, The end justifies the means, and after the class she called me enthusiastic:

So, what are your thoughts about the idea of Faking English?